Would you like to switch to the accessible version of this site?

Don't need the accessible version of this site?

Sleep apnea is a serious problem in breathing during sleep characterized by involuntary interruption in breathing for 10 seconds or more. This basically results due to obstruction or blockage of airways resulting in very narrow or blocked passage for air to pass during respiration. This could be possibly due to anatomical defect or mechanical obstruction. 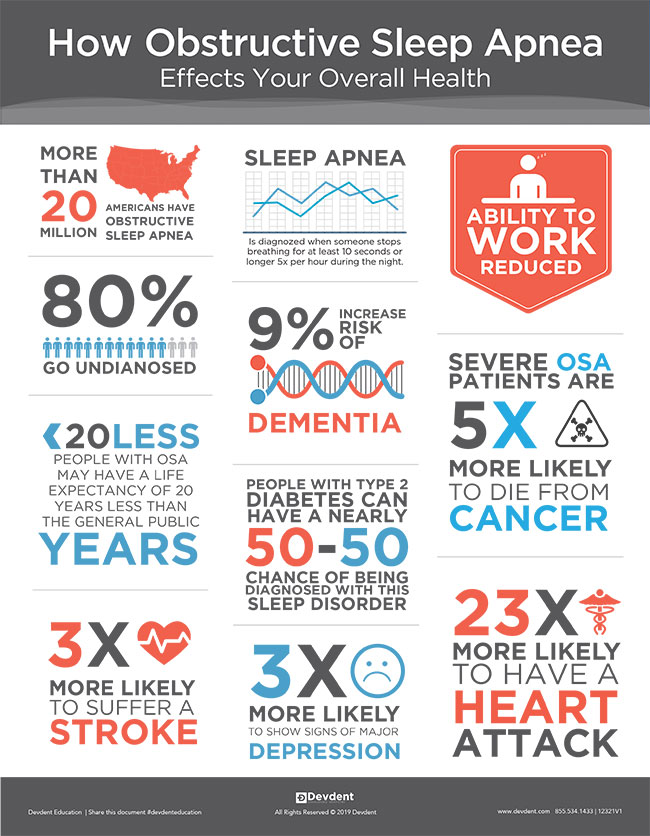 Anatomical defect is seen usually in deviated nasal septum, some syndromes most commonly where the lower jaw is under-developed like Pierre Robin syndrome, the tongue usually rests behind its normal position and in Down syndrome where the tongue is larger than normal (macroglossia). Many others syndromes and anomalies where the nasal and oral structures with upper airway passage are malformed or partially formed is associated with Sleep apnea.

Obstructive Sleep Apnea (OSA), otherwise in normal individuals is very commonly seen in over weighted or obesed population. This is due to the fat accumulation in the neck and chin area where it tends to obstruct normal breathing especially while sleeping as the muscles in the neck and jaws are relaxed.

Other causes includes enlarged adenoids, Tonsillitis etc which is seen in growing children who are more prone to infections. Tumors of thyroid glands, nerve palsy of vagus (cranial nerve X) etc could be the reason but very rarely noted.

SYSTEMIC EFFECTS OF SLEEP APNEA : There are series of consequences associated with sleep apnea depending on its severity.

Symptoms : This leads to difficulty in breathing specially on exertion, breathlessness, conscious breathing, severe cases may include waking up at night due to breathing difficulty. Most of the patients complains of snoring.

This is due to abnormal functioning of the heart muscles and abnormal contraction and relaxation of heart.

Exact relation with neuro- cognitive functions is unclear but it is thought to be associated with impaired oxygen supply to the brain thus hampering its activities.

They do not exhibit specific symptoms primarily. But over time they develop atherosclerosis and reduced elasticity of the blood vessels due to damage in the walls of the arteries affecting various systems in the body. If you find difficulty in breathing especially when asleep, its recommended to visit your nearby doctor to rule out the cause and delete the underlying reason as A HEALTHY YOU gives you a POSITIVE LIFE AND ATTITUDE :)

Send Us an Email

Find us on the map